Advances in scanning have allowed researchers for the first time to show lower levels of a protein found in the connections between neurons in the living brains of people with schizophrenia. The researchers, who conducted the scans at the psychiatric imaging facility at the Medical Research Council (MRC) London Institute of Medical Sciences, say these changes could underlie the cognitive […]

END_OF_DOCUMENT_TOKEN_TO_BE_REPLACED

Researchers have discovered in mice how one of the few genes definitively linked to schizophrenia, called SETD1A, likely confers risk for the illness. Mice genetically engineered to lack a functioning version of the enzyme-coding gene showed abnormalities in working memory, mimicking those commonly seen in schizophrenia patients. Restoring the gene’s function corrected the working memory deficit. Counteracting the gene’s deficiencies […]

END_OF_DOCUMENT_TOKEN_TO_BE_REPLACED 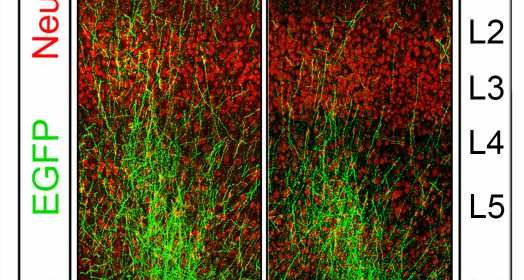 Columbia researchers have restored normal working memory to a mouse model of schizophrenia, eliminating a core symptom of the disorder that, in people, has proven virtually impossible to treat. Working memory is a fundamental brain process used to retain and recall information on the fly, such as remembering a new phone number long enough to dial it. It is severely […]

END_OF_DOCUMENT_TOKEN_TO_BE_REPLACED

A study recently published in Translational Psychiatry, a Nature journal, has shown how using cultured cells from patients with psychotic disorders, such as schizophrenia, to investigate abnormalities in nerve connections in the brain could lead to new treatments. Strong correlations were observed between the findings in the cells in culture—grown outside the body in a controlled environment—and findings from brain […]

END_OF_DOCUMENT_TOKEN_TO_BE_REPLACED

Schizophrenia, an often severe and disabling psychiatric disorder, affects approximately 1 percent of the world’s population. While research over the past few years has suggested that desynchronization of neurons may be the cause of its neuropsychiatric symptoms, including memory disorders, hyperactivity and hallucinatory phenomena, the cellular origin of such desynchronization remains poorly understood. Now, researchers at the University of Geneva […]

END_OF_DOCUMENT_TOKEN_TO_BE_REPLACED

(HealthDay)—Remission can be achieved for most cases of schizophrenia and schizophreniform disorder with amisulpride and clozapine, according to a study published online Aug. 13 in the The Lancet Psychiatry. René S. Kahn, M.D., from Brain Center Rudolf Magnus in Utrecht, Netherlands, and colleagues recruited 481 participants from 27 centers in 14 European countries and Israel. Patients aged 18 to 40 […]

END_OF_DOCUMENT_TOKEN_TO_BE_REPLACED

Schizophrenia affects your body, not just your brain – new study

Schizophrenia is considered a disorder of the mind, influencing the way a person thinks, feels and behaves. But our latest research shows that organs, other than the brain, also change at the onset of the disease. Scientists have known for a long time that people with schizophrenia have much higher rates of physical illness compared with the general population, and […]